FireOne is the world leader in digital pyrotechnic firing systems. It is American built and has been responsible for firing most of the largest and most complex displays in the world, including Sydney Harbour New Year’s Eve, the Burj Khalifa in Dubai and all of the Disney Theme Parks. Our team alone has used the system to fire the London 2012 Olympic and Paralympic Ceremonies, Glasgow 2014 Commonwealth Games, London New Year’s Eve, Edinburgh’s Hogmanay, Rugby World Cup 2015 and the 50thanniversary of the Forth Road Bridge.

The firing system is reliable, precise, has a host of safety features and can be scaled up to fire thousands of fireworks with 1/100thof a second accuracy over hundreds of locations spread over a massive area. Our display from the Forth Road Bridge perfectly illustrates the extent the system can be used – fired from 100s of locations spread over nearly 2 kilometres including two towers that were 60 meters above the road deck, triggering over 6,000 cues in a 6 minute design synchronised to a soundtrack. 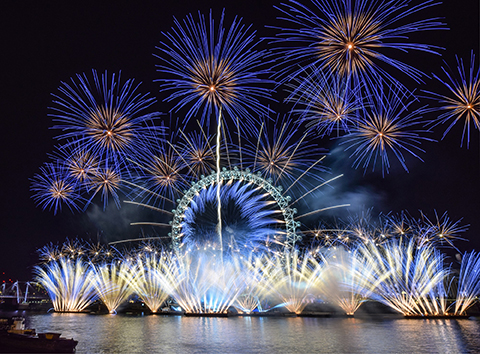 FireOne offers a wide range of control methods to suit every scenario that we face, whether on a green field site, a barge on the Thames, Tower Bridge or the roof of the Olympic Stadium. We can fire a display of great complexity synchronised to music using either wired and wireless capability, to a pre recorded soundtrack or a live orchestra, from either a fully automated fire file or a semi-automatic set of sequences when we want to just fire separate events.  The latter is normally appropriate for live events and ceremonies where we need to react to a visual cue rather than timecode.

The system boasts a range of hardware and propriety software which allows the user to choreograph and fire displays limited only by your imagination. Titanium Fireworks continue to be at the vanguard of firework design and creativity delivering the country’s biggest and most prestigious displays.  We are proud to own the largest resource in the UK with over 250 field modules and 20 firing panels, which is just enough to deliver Edinburgh’s Hogmanay and the Mayor of London’s New Year’s Eve display on the same night!