Whether we are asked to fire from an irreplaceable 11th century castle, a 2 kilometre long bridge or a 150 metre high observation wheel overlooking the Houses of Parliament we have the knowledge and experience to engineer a solution.

We are proud to have fired from a multitude of the iconic buildings across the British Isles, including the London Eye, the Olympic Stadium, the Elizabeth Tower (Big Ben), Tower Bridge, the Orbit, and Edinburgh’s Castle, the Assembly Rooms, Wembley Stadium, Twickenham Stadium and Queen’s College Oxford.  This has been achieved either by utilising existing platforms, or by designing and manufacturing a bespoke solution which can be attached to and fired from the structure, without leaving a trace.

A key thing which can be overlooked when firing from a structure, as opposed to the middle of a field is that the pyrotechnic material has to be suitable for the task.  If you are firing  from a building where normal exclusion zones can be enforced then traditional fireworks can be used.  However if the material being fired is in the middle of a bustling town centre for a Christmas light switch on, or over the heads of 80,000 people in the Olympic Stadium (including the Queen and numerous other heads of state), then the pyrotechnics used must be zero debris, and perform exactly as planned, every time.

With many of these structures, gaining permission to fire is not a straight-forward task.  There can be multiple stake-holders involved, often including Architects or Civil Engineers who need to see calculations of the forces exerted by the products to be fired, or even details of the chemical compositions to ensure that no damage is done to ancient stonework.  We are accustomed to dealing with any such queries to ensure that all parties can be certain that what we are doing is safe not just for the audience, but also for the structure.

With the ever increasing popularity of summer concerts at stately homes and parks we have provided close proximity pyrotechnics at many of these to provide a fitting finale to some major concerts including BBC Proms in the Park, Warwick Castle, Audley End and Fountains Abbey.  We have fired stage and arena pyrotechnics from the roof of the stage, as well as special effects from the truss above giant screens. In doing so we have had the privilege to work with many artists including Gary Barlow, Kylie Minogue, The Who, Katherine Jenkins, Paul Weller and Coldplay. 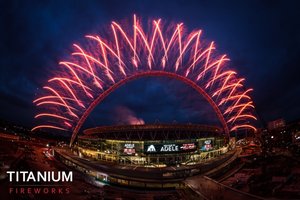 Enquire about a Titanium Fireworks Display