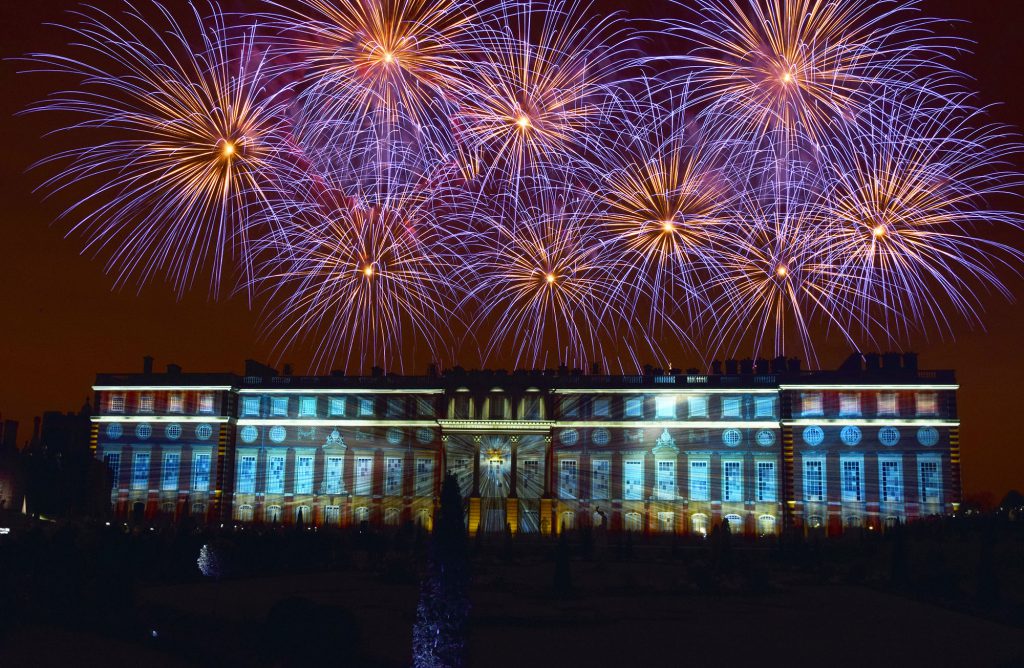 During the last few years we have had the pleasure of working on a number of exciting and unusual projects, many of which have involved firing at historic buildings ranging from Tudor royal palaces to Victorian wooden piers.

The annual Edinburgh’s Hogmanay display is a major National Celebration launched from the ramparts of the 12th century castle, owned by Historic Scotland. It is not a simple task of just turning up with the fireworks and equipment, loading the display and firing it; months of planning go on behind the scenes with the various stakeholders to ensure the safety of the audience, the castle and its staff, as well as priceless artefacts such as cannon, stained glass windows and the One O’clock Gun.

Great care is taken to protect the buildings and contents; wooden sheets are laid under the mortar tubes and firework holders to ensure we do not damage the flagstone floor and the priceless cannons are covered to prevent any smouldering debris from marking them. We also have to be mindful that the castle is a major tourist attraction so our rig has to fit around the thousands of daily visitors.

Less than a mile away, on the 30th December each year we also fire a complex pyromusical finale to the famous Torchlight Procession on Calton Hill. We launch from multiple locations between the 200 year old Nelson Monument, National Monument and City Observatory as the finale to a procession of up to 40000 people bearing flaming wax torches snaking through the streets of Edinburgh.

Another unique opportunity provided us access to Hampton Court Palace to mark its’ 500th Anniversary. Firing a large aerial display from three locations ensuring the safety of an irreplaceable palace meant that we had to demonstrate beyond any doubt that our risk assessment and method statement were robust enough to protect the building from any hazards.

Over the course of the eight years of designing and delivering London’s New Year’s Eve display, our team was given the opportunity to fire from Big Ben (officially titled the Elizabeth Tower). Given the building is one of the most iconic structures worldwide, it was imperative that whatever we delivered would have leave no marks whatsoever. The quarry where the stone originated from no longer existed, therefore the stonework is irreplaceable. The rigging method had to be self-supporting and numerous calculations had to be undertaken to assess the forces exerted by the pyrotechnics launching and also whether there would be any chemical residue that could cause corrosion of the stone.

Our experience of firing from these historic buildings has given us an un-matched level of expertise to assess the appropriate fireworks or pyrotechnics to achieve the desired effect whilst guaranteeing the safety of the structure. If you have an enquiry that is unusual, please don’t hesitate to get in contact and we will explore the feasibility of even the most challenging of sites.