As we approach the 75th anniversary of the end of the 2nd World War the celebrations will be somewhat different and sombre compared to the events 25 years ago, largely due to the Covid 19 outbreak and the need to socially distance during this period of lockdown. While the events we were due to play a part in to help commemorate and celebrate have understandably been cancelled there are some smaller events that can still go ahead on 8th May 2020 while we are following the lockdown. We thought it was worth looking back 25 years to reflect on the huge celebrations that we were fortunate to be a part of back in 1995.

At the time we were working for a different fireworks company and under the leadership of Tom Smith the company was awarded the contract to deliver a huge firework display to celebrate the end of WWII. It was arranged to be a combined event commissioned to celebrate VE day and VJ Day, and to be held on 21st September 1995. Due to the scale of the event a large crew was required and this was the first event that Darryl Fleming and Simon Page worked together; a pairing that would go on to form two of the directors of Titanium Fireworks. A little known fact is that in the audience watching the display was a very young Toby Alloway who now makes up the third founding director of Titanium Fireworks.

The display was fired from five barges stretching nearly 4 km of the river Thames, from Tower Bridge to the Palace of Westminster. In addition there were 8 sound barges moored mid river along the Thames to broadcast the soundtrack to the thousands of people who came to watch the display. Synchronised to a 20-minute soundtrack, the display was the largest ever seen in the UK, which included a rendition of “We’ll meet again” by Dame Vera Lynn. As a part of the show we built a huge lancework firework which made her jump when she pushed the big red button to start the display.

Having now worked on many largescale display like London New Year’s Eve and the Commonwealth Games and Edinburgh’s Hogmanay, it is very interesting to look back on not only the style of the display, but the technology to synchronise 5 barges and 8 tons of fireworks to music. Back then there were no laptops or computer firing systems and no timecode, just a manual firing board firing 102 sequences of fireworks on cue called by a vocal command played from a tape recording run alongside the music and broadcast to the firers on each barge. Looking back to where we are now it seems very primitive and simple but it worked and delivered an amazing synchronisation along the length of the display. The style and types of firework we used was also very different as we didn’t use single shot effects or cakes, just large batteries of multishot roman candles from manufacturers like Panzera, Moog, Soldi and Pirofantasia, with volleys of shells above, including some multibreak cylinder shells from Malta, which are no longer used.

Below is a link to the display. 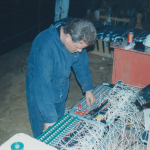 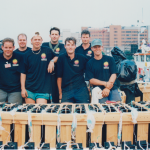 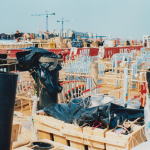 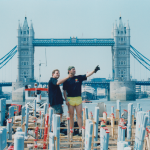