Difficult to choose but if I may I will select two:

2012 in the Olympic Park – Opening Ceremony

Following a busy week down at the wonderful Silvertown Dock, preparing the shell barges (seasick pills at the ready), my show position was on the Athletes’ Bridge.

Prior to show I enjoyed the spectacle of all the athletes making their way to the Stadium, trying to spot anyone famous ( only Usain Bolt) and realising that my knowledge of World geography is not good. Comoros was a new one on me.

Show position started in the middle of the Athlete’s Bridge.

After the amazing, initial chase down the tow-path and spiral up The Orbit, the shell barges, which were along the River Lee, joined in to create a stunning assault to the senses – and prompted a move away from the middle of the bridge, to a safer viewpoint. 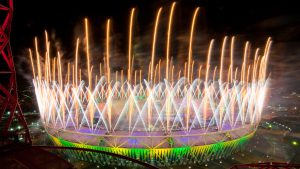 A chance for me to “show off” with a show fired to some of the Bride and Groom’s favourite music – starting with the theme from Thunderbirds (Grooms favourite).

A brilliant show designed by Toby and with much help from Simon and the Titanium team. Thank you again guys. 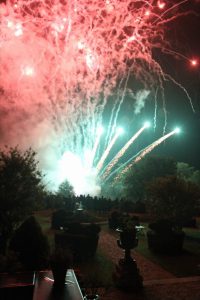 What do you most enjoy about your job

The opportunity to work with like minded, hard working people with a wide selection of pyrotechnic experience and always with a great sense of humour (funny, weird, sick – and that is just me)

This means that for a large percentage of the shows we have a very focussed and efficient team .

I always enjoy the audience reaction at the conclusion of the shows.

What aspect of your job do you least enjoy

When having to disappoint a client/audience if we cancel – thankfully not often in my experience but each time due to weather ( 20m visibility due to fog, the last time – not sure that I would have seen anything let alone the audience)

When people get upset (drunk) and get into the firing zone, riding a bicycle and question if my Parents were actually married.

Favourite Project to have worked on

I have worked on many large and small shows, including The London Olympic & Paralympic Games, Commonwealth Games and the wettest show ever, to an audience of 4 on a waterlogged football pitch.

I wrote some notes last year to answer this question.

Into the New Year I would like to add a second.

This show takes place in the stunning theatre that is created by the beautiful Trinity College gardens, the River Cam and the 17th Centre Wren Library.

I have been lucky to have been crew for this show for many years. Each design by Toby and the effects created are brilliant and seem to improve each year – the photos and the videos on the Titanium website are testament to this.

The whole atmosphere leading up to firing time is very entertaining – Oh, and it also takes place in my home City so I get to bed at a reasonable time. 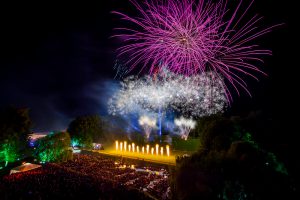 A favourite for several reasons but mainly because of the exceptional organisation and preparation that had happened before the event, followed up by the planning and organisation on-site and the best site team that I have worked with.

A magnificent stage to work on, at The Castle and pretty good weather ( although the morning with 96mph winds was interesting).

I will remember my show location with fond memories – as a spotter on The Mound, near the Scottish National Gallery, surrounded by very excited and friendly revellers. 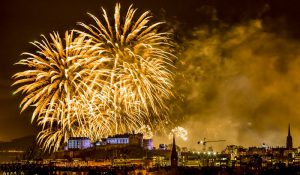 Favourite Photo from the Titanium Portfolio

I have already mentioned those from Trinity May Ball but I also like those from wonderful Blackpool. 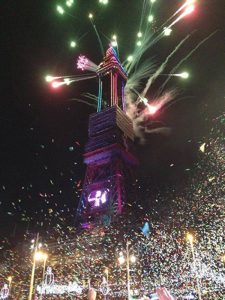 I don’t think that I have ever thought about a bucket list but if one day I ever become a Grand Father, then I would like to go with Grandchild, bucket & spade, to my favourite place (see next answer) and make sand castles.

Of course this depends upon there being a Grandchild so I will include something which I feel sure that I can check off, which is to see my favourite band, for the 22nd time in 2016 – The National www.americanmary.com

Whatever the weather it a special, vast space with huge skies and the location of many happy holidays.

After driving back from Edinburgh, on 2nd January, I continued on to Holkham.

A place where all the “rubbish” of life goes away.