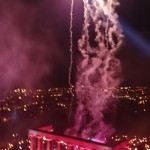 22% were from Edinburgh & Lothians

Tickets were bought from 64 countries

Edinburgh’s Hogmanay 2015/16 is a key part of Scotland’s tourism calendar, and generates £42million in economic benefit for Edinburgh with around 150,000 people coming to the city for the three day celebrations.