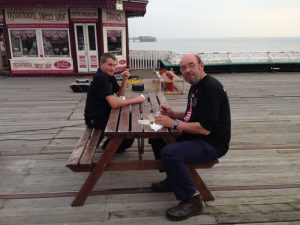 My day job usually consists of:

So for a welcome change – I AM GOING TO THE SEASIDE!!!

Not just any seaside resort but to “the most popular seaside resort in the UK” where the founders of one of my favourite bands were born – Jethro Tull – and where my favourite artist, Roy Harper, spent his childhood. I long for a display fired to their music but guess that I will have to put up with the likes of Thicke, Blacc, Newman etc. As an aside, did you know that in 1964 The Rolling Stones were banned from ever performing in Blackpool? The ban was very optimistically lifted in 2008. Anyway, back to my week.

After a 55 minute battle on the A14 to the “depot” for a 09.00 depart, the first change to the plan was made, and it was decided that we would be travelling in a different vehicle. However, that wasn’t a problem as flexibility is one of the main requirements for the Titanium crew – we know arrangements will often change at the last moment so we are used to adapting our plans accordingly.

We were now travelling with S.G. and an ADR load that contained the fireworks for Friday’s show. Before we re-joined the A14 we checked that the “Carriage of Dangerous Goods” signs were in place, then it was time for a brief stop on the M6 for an overpriced coffee at Costabucks, and a reluctant visit to one of the grimmest places on earth – a motorway services toilet. 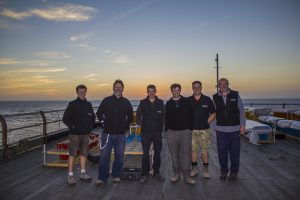 We continued our journey along the motorway then our first signs of Blackpool came into sight. First we saw the famous promenade, then the iconic trams and the Tower – and it was looking good in the sunshine. Next, we took a 500m walk down the length of the North Pier, which would be our site for the show, to meet up with the rest of our crew, some that I had not seen since last year.

Then it was time to start thinking about the show. The show would be the conclusion of the annual Blackpool World Firework Championship, and it is the non-competitive Finale show, by Titanium Fireworks. The dates of the main show were:

The afternoon was spent organising shell location at the end of the Pier, with ply sheets below the mortar racks to protect the wooden deck of the Pier. All unwanted kit was then broken down/removed from the Pier and the shell area was secured.

After a long time, we were pleased that we had a reasonably early finish, and after securing our transport (and the fireworks) at the Council depot we’d arrive at our hotel. We had a couple of drinks followed by a fantastic Chinese/Thai meal at Titanium’s favourite restaurant, but we didn’t find much else of interest when it came sampling the “delights” of Blackpool – unless you count the pubs with sticky floors (keep moving your feet or you will never leave), or 120 decibel music, and suspicious/threatening looks from guys wearing badly spelt tattoos and their best face-jewellery. 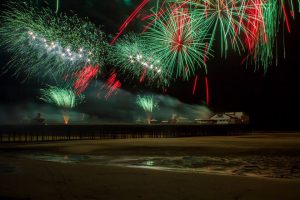 The next day got started with a big breakfast then we headed back to the North Pier – the weather was a bit grey and windy; there weren’t many people around as we got back to our location.

Back at our base, we put the mortar tubes into final positions and the plastic sheets were prepared “just in case”. The fireworks were then transported from the Pier head to our secure area by the very helpful Pier staff and their Gator. After a briefing and discussion about timings, the shells were then loaded into the tubes; at this point I said a quick “thank you” to the (usually absent)guys that prepared the shells, who packed them in a site-friendly manner, per-module. That saved us a huge amount of time so we were all extremely grateful.

During the shell loading the “just in case” plastic sheets were needed a couple of times – I am not sure if we experienced rain or spray from the lively tide. With the shells completed, modules connected and tested, it was now time to start on the front positions. The shells would be lined up along the Pier; we could not put these in place until the Pier was closed to the public later in the afternoon, so these were all prepared in our secure area – a mixture of single shots, multi-shots, mines and cakes. With that done, we headed for an (uninspiring) lunch, then it was back to work.

The front positions were placed out, data cables were run out, and the modules were connected and finally tested. In the meanwhile some hardy members of our audience had already taken up their position along the Prom ready for the show.

With some time to spare before the event, I took the chance to go shopping. I walked across the tram tracks for some of Blackpool’s finest??!! Rock (not for me but for my daughter’s boyfriend). It was a new flavour this year – Chicken Tikka. Some of the shapes would make your eyes water – especially the one that looks like a child’s dummy but it is much, much larger and is designed to fit an orifice at the other end of the body!! I decided to pass on that and instead I treated him to a “Full English Rock Breakfast” complete with 2 fried eggs.

Ahead of the show, I returned for a further briefing where the team was told where our show positions would be. I discovered that I was to be on top of the Theatre roof with Pier Manager H (someone that I have met many times before and who has a great sense of humour) overlooking the shells to our right (West) and the front positions to our left, and the shore. We acted as spotters for any problems, which we could then relate to our shell/front position crew who were standing by with fire hoses.

With moments to go before the show, the winners of the Championship were then announced to the huge audience. This year’s winner was Firemaster Productions of Canada. Congratulations to Sean Morris and his team! 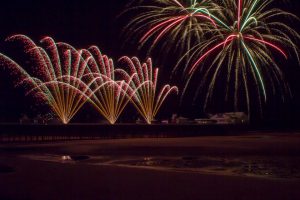 Showtime began at 20.30, to a selection of music by Coldplay,

firework companies, Aloe Blacc and John Newman. H., while I spent the duration viewing and checking the various buildings and structures. At the finish there was a huge cheer and applause from the audience – how many of us can say that their work finishes with a huge round of applause?

Radio contact was then made with all the crew for clearance to confirm that everything was safe and we were good to go. S.G. and I.W. then had fun with the hoses dousing the shell embers. H. then gave me clearance to leave the roof – it was time to check any remaining live shells; every shell fired so clearance of the shell area could begin.

With the help of H. and his fellow Pier staff, the Pier was cleared of all our equipment and the spent fireworks were loaded onto the appropriate vehicle; we went back to the hotel for a well-earned drink at about Midnight.

The next morning, we began the day with a second huge breakfast and then we were on the motorway to begin the journey back to the depot.

We were thrilled to read some of the feedback about the show. Graham Cain, a member of Blackpool Council and one of the Championship Judges described the event as “…an incredibly skill full and serious technical competition”. Quite Right.

VisitBlackpool.com reports that the dates for next year’s championship have already been confirmed as 11th, 18th & 25th September plus 2nd October.

My bucket and spade are already packed!