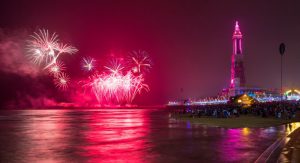 The annual festival, which runs every Friday night throughout September, saw competitors from Sweden, Austria and Canada battle it out to be named the winner.

And as Great British pyrotechnic experts Titanium rounded off the annual spectacle on Friday (26/9) the judges announced it was the Canadian team who were the overall victors.

Sean Morris MD of Firemaster Productions, said: “We are very proud to have been invited to participate, and winning this year’s edition is an absolute dream.

“The displays by Team Sweden and Team Austria were simply fantastic and we are very fortunate to be crowned the winner.

“We would like to thank the crew from Titanium Fireworks for all their hard work and special thanks to everyone that attended our display.

“We hope to compete again soon.”

Blackpool hosts the World Fireworks Championship each year in September when tens of thousands of people make the trip to the resort each week to watch the amazing pyrotechnics light up the skies.

Cllr Graham Cain, Blackpool Council’s cabinet member for tourism and leisure, said: “The quality of the displays at this year’s World Fireworks Championships was absolutely incredible and anyone who attended was treated to a real spectacle.

“It’s pleasing the popularity of the event continues to increase.

“We look forward to delivering another stellar line-up next year.”

VisitBlackpool is the tourism arm of Blackpool Council and is tasked with promoting the UK’s most popular holiday destination to leisure and business visitors, both domestically and internationally.

Located in Niagara Falls, Canada, Firemaster Productions has been producing world-class fireworks displays since 2006. They specialize in large scale productions and have successfully produced Canada’s largest pyro-musical display in Toronto for the past 2 years. In addition, key members of our team were part of the 2010 Vancouver Winter Olympics Opening Ceremony.

They use state-of-the-art software to design unique and spectacular displays using music that is fresh and modern.