Synchronising fireworks with music – Our Guide 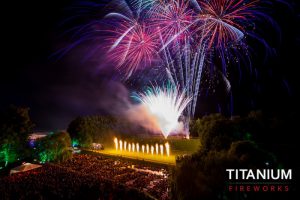 Synchronising fireworks with music has long been one of the key parts of most major celebrations. Shows like the Olympics and large New Year’s Eve celebrations have a spectacular display of fireworks that are complemented by music. However, before the show can become a reality, there are three major steps that must be taken.

When planning a display, one of the most essential parts of the design is the music, and this is where the planning of the synchronised event should begin. Usually, the design team will have spent a lot of time listening to music and deciding which tracks will complement the show.

As a professional team we have also built up a bank of suitable music so already have an idea of what works well. Once the tracks have been selected, the design team will then begin to start work on building a soundtrack. The soundtrack will be carefully tailored so that is suits every part of the display, each song selected will synchronise well and blend seamlessly with the next track.

When it comes to choosing the music it will be something that is powerful as well as inspiring and it will be designed to match the mood of the event. The genre of music that is chosen can vary as many types of music are suitable for a synchronised firework display. Depending on the event, the show organiser will select anything from dance music to a power ballad, but they’ll make sure that it suits the occasion and blends seamlessly together.

The selected music will also have its peak moments and its calmer moments in order that it works with the highs and lows of the exhibition. Once the music has been selected, the hard work isn’t over. It is imperative to ensure that each track will work in tune with each part of the exhibition, that means planning the display right down to the last detail and editing and arranging the music tracks so they are in perfect sync with the fireworks – and this will take the work of an expert team in order to achieve this.

The next part of the design process will be to start planning how the display will work; the design team will often use the sky or nearby water as a backdrop for the display. For instance, the River Thames is often a major focal point for synchronised firework spectacles at New Year’s Eve and the sky above Big Ben is often used to provide a stunning backdrop.

Event organisers will usually spend months planning every detail of the display. The main starting point will be to list the type of fireworks that are to be a part of the event; this might include catherine wheels, shells, roman candles, rockets etc.

After the basics have been planned it will be time to start looking at other aspects of the show such as aerial devices; the loudest, most spectacular fireworks will be left to the end of the evening to literally allow the night to finish with a bang and give the gathered audience something special to remember.

Once the components of the display have been decided, it will be time to begin sketching out the location in detail. This involves drawing the area where the exhibition is to be held in and then deciding on the exact location of each firework.

These days software and hardware is used to help coordinate these shows and it can be used for anything from a simple firework spectacle to a much more complicated exhibition. This type of software is crucial for helping to plan the show in detail and comes with the ability to design the firework display on screen so that it is possible to get a good idea of what the firework exhibition will look like and to make further refinements if they are needed.

This type of software has several key components to help ensure that the event goes smoothly such as music score software to enable event organisers to edit the music that they need for their display, and a script/maker programme to allow the design team to synchronise the fireworks with the music.

One of the other major parts of software and hardware used for these events is the firing panel. The advantage of using the firing panel is that it removes the need for bulky cabling and it can be managed digitally. The use of a firing panel allows a much greater degree of accuracy and is often used for confetti displays, stage shows etc.

Some design teams will choose to use the firing panel for key parts of the show, while others will use software and hardware to conduct the entire show.